Well this single is out, and had a rather lackluster first week of sales by not even managing to break 100k in sales for the first week. I cannot say I am surprised as this single did not have as many tie-ins as the previous one and the title song has to be their weakest A-side yet. I hope Johnny's has a plan to get this boys promoted more or I do not see them doing much better with their next single. 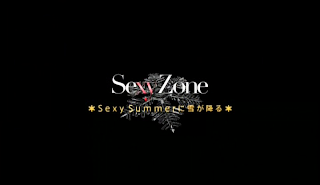 I do not think there is anything that is going to change my mind about this song. I have listened to it several times over and still think it sounds like B-side material. There really is nothing about it that sticks with you after listening like Lady Diamond, and musically it sounds like a mess. And it does nothing to show off the vocals of the members even though Nakajima Kento and Kikuchi Fuma have voices that are strong enough for more challenging songs. Overall I find this song a let down and the B-sides of this single are what saves it from seeming like a complete waste.

I guess we should get used to all Sexy Zone PVs starting off with a solo shot of Sato Shori. Johnny's really seems to want to make him being the Ace of the group work no matter what.

We then get a group shot to see all the Christmas themed outfits. I still do not like seeing a Christmas themed single being released so early. Sure they also bring up the other seasons and all but Christmas is still the main theme and until winter hits I do not want to see it.

We get a quick look at the main sets of the PV which showcase one of the four seasons, winter, spring, summer and fall. As well as the group of Juniors that will be featured in the PV.

Nakaken then gets the first of his solo lines in. I do like they are continuing with letting Nakaken and Kikuchi vocally carry the songs of the group. I feel the two have been improving steadily since debut and they both have nice vocal tones to their voices which makes them nice to listen to.

Kikuchi gets his turn at solo lines as well as we move to the fall set that apparently has a runway as its main feature. Perhaps because I do not follow the world of fashion but I would not think a runway had much of a specific fall feeling to it.

While I am not a fan of the winter outfits the summer outfits in this PV have to be the worst. They look like something Johnny's would force the Juniors to wear. In fact I will be disappointed that years from now there are not Juniors wearing them.

There are plenty of scenes to see the Juniors in for this PV. I am still not familiar with most of them but a there a few I am getting to know finally and I am glad to see them getting extra exposure by being in the SZ PVs.

Nakaken gets to show off his piano playing skills with this PV. I feel like this song does not deserve it, but hopefully this will not be the last time Nakaken gets to play piano in a PV for the group.

And we get pure cuteness from Yo Marius and Matsushima So. Seriously, it is like watching a group of puppies or kitties and could give you cavities.

Then we get cute with the summer set with the dance forgotten for just the group and the Juniors jumping around. Kikuchi tries to give one of the smaller Juniors more screen time by lifting him up.

There is even more cuteness with the boys goofing off with the over-sized apple prop. Matsushima looks more like he is biting into Kikuchi's shoulder instead.

Going to have Matsushima shown in his quick solo shot as I feel like he gets overlooked a lot. Rather sad as he seems to be one of the better vocals for the younger members. Though he also has to go through his voice changing so hopefully nature will be kind to him on that front.

I am not really impressed with the dance for this song. There is really nothing about it that stands out and it looks rather simple.
Then we get a group shot as each members says a line. After this is another group shot then the end of the PV. And I do not like how they make the white so gleaming. I think it is an eyesore, not to mention it washes out the color in the boys' faces to an unnatural degree.


I really do not want to repeat myself too much but I really do not care much for this song or the the PV. Sure there are a few moments that I did like but it was mostly boring for me. It seems disappointing that this is bound to be the final release for the group this year and we probably will not get anything new until spring of next year if they follow the typical release pattern of the most recent FIVB groups. I hope we do get something sooner but I will not be holding my breath.

I have nothing really against Shori, but I do wish Johnny's would stop pushing him so hard. I think he has potential but until he starts living up to that potential he is going to remain overshadowed by the older members that are hitting their stride as performers. Give him a year or two more to grow a bit more and get more experience under his belt before pushing him as they have been. Nakaken and Kikuchi are both more than ready to be the ones to carry the group for now.
Posted by Thennary Nak at 9:31 PM

I agree with a lot of what you say but I'm more optimistic. With little promotion, no special handshaking deal, an unexceptional song, stupid costumes, and an uninspiring PV, Sexy Zone still managed to come up with a #1 song. That's not bad!

Shori is the most popular member, and he is a bridge between the older college-age guys and the younger middle-school guys. It makes sense to always put him in the middle and promote him. No question that Nakaken and Fuma are the seasoned pros. Marius and So have been the chibi stars but they are growing up and are taking a more mature role as leaders of the Sexy Boyz unit. There's more potential for both younger and older members, and Shori's the one who can make it all come together.

I don't think it's promotion so much as the song next time. If Sexy Zone can get a great song they will hit new highs in sales and popularity.

True, but a big part of it was that it was released on a very weak sales week. Though I guess there are plenty of artists out there that would have loved to have their sales.

Thinking about it I can see why Shori is pushed for the center, since this is supposed to be the youth group. I guess I'm just thrown off with how much the older two have become stronger as performers in comparison. But I guess everyone grows at their own pace and since Shori is getting placed with the older two perhaps he can start showing signs of catching up with them.

I think it is a bit of both. A good song definitely helps, but so does promotion. Perhaps Nakaken or Kikuchi should star in the next late night NTV drama series to help out with that.

I love the review! I mean, I absolutely adore this PV and song, but I'm easily pleased with anything Christmas themed, so that may be down to it, but your points are extremely interesting and helpful in letting me see different points about the PV which I have failed to see through my love of the video.

I find Sexy Zone so entertaining, the song is just so... likeable, but I agree, this is their weakest A side, but it has a nice innocent fun factor to it which I enjoy.

I'm a sucker for anything Sexy Zone and Christmas now though, I think! Generic or not!

I'm glad you liked the review even though our opinions are so different about it.

I will agree there is a lot of innocent fun to be had with this song and this group. I think I have been a Johnny's fan for so long that I need a bit more than that as there have been quite a few groups before them that had that same kind of appeal.

I don't think the problem with the song is that it is generic. It almost sounds like there were two songs that they tried to smash together but came out with a mess then something that would actually work to me. That and for me Christmas songs are a seasonal thing for me. Sometimes I can let a few slide but I have to love them to bits for that.

Sometimes I feel pity for Kento and Fuma that they are in this group. I like Sexy Zone but both of them can do much better musically. Even though Kouchi and Hokuto didn't debut with them, I thought they got a better deal. Being in a group with guys their age and sing more rock-ish songs (which would be amazing with Fuma's voice).

The privacy of our visitors to http://never-ending-music-power.blogspot.com/ is important to us.

Log Files
As with most other websites, we collect and use the data contained in log files. The information in the log files include your IP (internet protocol) address, your ISP (internet service provider, such as AOL or Shaw Cable), the browser you used to visit our site (such as Internet Explorer or Firefox), the time you visited our site and which pages you visited throughout our site.

Cookies and Web Beacons
We do use cookies to store information, such as your personal preferences when you visit our site. This could include only showing you a popup once in your visit, or the ability to login to some of our features, such as forums.

We also use third party advertisements on http://never-ending-music-power.blogspot.com/ to support our site. Some of these advertisers may use technology such as cookies and web beacons when they advertise on our site, which will also send these advertisers (such as Google through the Google AdSense program) information including your IP address, your ISP , the browser you used to visit our site, and in some cases, whether you have Flash installed. This is generally used for geotargeting purposes (showing New York real estate ads to someone in New York, for example) or showing certain ads based on specific sites visited (such as showing cooking ads to someone who frequents cooking sites).

You can chose to disable or selectively turn off our cookies or third-party cookies in your browser settings, or by managing preferences in programs such as Norton Internet Security. However, this can affect how you are able to interact with our site as well as other websites. This could include the inability to login to services or programs, such as logging into forums or accounts.